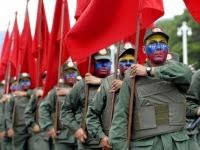 "We warn the opposition:  our revolution is peaceful, but it is not disarmed. People know we are fighting for the future of humanity. It is the poor who will reign over the future," President Hugo Chávez recently announced via his twitter account,@chavezcandanga. In reference to the right wing opposition he wrote, "They have a plan for violence and military intervention, backed by imperialism."

Many Venezuelan and foreign analysts say that the fire in the oil refinery of Amuay, state of Falcón, was part of the "plan for violence ... backed by imperialism."  Indeed, when looking more closely, we can recognize the handwriting of the CIA and Mossad all over it.

The Venezuelan journalist, Modeira Rubia, wrote in Barinas that the fire looked like, "the result of deliberate sabotage to undermine Hugo Chávez's chances of victory" in the upcoming presidential elections on the 7th of October. The fire broke out just 43 days before the election date, a planned and deliberate attack against the economic heart of Venezuela, its oil industry.

Percy Francisco Alvarado Godoy, a retired Cuban Secret Service agent turned journalist, voiced the opinion that the explosion in the refinery of PDVSA in Amuay could have been executed by clandestine specialists acting on behalf of the CIA and Mossad. He had already warned a month before the incident that all sorts of terrorist acts were to be expected in order to destabilize the country.

Interestingly, the right wing opposition candidate launched a propaganda blitz immediately after the fire broke out in Amuay, as if he had known in advance what would happen. But the attempted coup d'état backfired:  the Venezuelan people stand united and support Comandante Chávez, now more than ever.

His pre-election polls look splendid, reaching an approval rate of 70 percent, while those of the imperialist puppet and right wing candidate, the "Majunche" (Mediocre), look miserable.

Four parties withdrew their support for him. The organisations "Vota Piedra" (Vote Rock), "Cambio Pana" (Change Friend), "Unidad Democratica" (Democratic Unity) and "Mano por Venezuela" (A Hand for Venezuela) decided that they will not appear on the right wing opposition's ballot ticket.

Most Venezuelans are appalled at the opposition's brutal media war against President Chávez and the stepping up of violent acts on their territory.

"The counter-revolution, with its inability to win via electoral means, has a plan to generate violence, destabilization and intervention before the elections. Such is shown by the attacks of the right wing's spokespersons and their media that ranged from calling for Chávez's resignation, to making attacks against the Bolivarian National Armed Forces (FANB), to attacking the National Electoral Commission," the Frente Francisco Miranda Youth Organization wrote in its bulletin.

"We must prepare ourselves for the scenario they call plan B, which the gringo embassy in Caracas and the CIA are preparing," they warned.

President Hugo Chávez, however, is harboring his own plans. A long time ago, he started to fortify the FANB and founded the civic militias for additional vigilance of the homeland.

Civilians participate in battalions, specifically geared to them. All strata of society have their own proper battalions. There are peasant, women, worker and student battalions. Additionally, young communications specialists form communicational guerillas, to raise awareness among young people about the media lies of the Venezuelan right wing fascists.

Each year, April 14 is celebrated as Day of the Bolivarian Militias, when President Chávez reminds the population that, "The militias are the people, and the people are the militias. The armed people and the armed forces are one."

Civic militias have a long tradition in history, from the workers' guerillas in Russia, who overthrew the Tsar in 1917, to the Cuban militias, who helped the Cuban Revolution and Fidel Castro in the late 1950s.

The Venezuelan militias are armed with Russian-made Kalashnikov AK-47 rifles, effective and versatile weapons, light and easy to use. The militias assist regular training sessions, just like the FANB does.

As a former Lieutenant Colonel of the FANB, President Chávez says that, "A soldier, who is not anti-imperialist, is not a Venezuelan soldier."  He wants to fortify the patriotic spirit and pride in wearing the Venezuelan uniform.

Hugo Chávez warned all members of the FANB, National Guard and Militias that the imperialistic strategy aims at reducing the Venezuelan soldiers' pride and self-assurance by ridiculing their efforts and achievements.

"Their media bombard us incessantly to minimize our national pride, so that people will feel ashamed of being Venezuelan soldiers. This is their strategy, their structure of domination," he pointed out.

President Chávez encourages his people to live according to their democratic, socialist and patriotic conscience, ignoring all attempts of manipulation by foreign agents or media.

"Misión Soldadero" was launched to give Venezuelan soldiers greater benefits by raising their salaries and upgrading their housing, as 30.000 new homes will be built in Forte Tiuna (Caracas) to benefit 150.000 military personnel.

Special funds have been created for education, recreation and social security of the FANB.  "A soldier should be able to spend a vacation of 15 days on Margarita Island or in some other Caribbean resort with his family," the President emphasized.

As Supreme Commander of the FANB, he has decided to modernize military units and equipment.  Currently, engineer brigades are being transformed, for example the 61st Brigade of Refurbishment Engineers and the 64th Brigade of Railway Engineers. Furthermore, tactical units have been installed:  the 608th Support Battalion; the 613th, 621st and 632nd Refurbishment Battalions.

This year, many military maneuvers took place in different regions of the country:

The Venezuelan Navy embarked on drills from the 12th to 16th of May. Operación Quigua 2012 was carried out to evaluate capacities and deficiencies of the Navy. Vice Admiral Victor Araujo commanded the simulation maneuvers which started from the Aeronaval Base Antonio Díaz on La Orchilla Island in the Caribbean Sea. In the training involved were amphibious tanks, missile launcher frigates, patrol ships of the Venezuelan Coast Guard and Sukhoi fighter jets.

Furthermore, the FANB undertook a maritime radar vigilance project, supervised by Admiral Diego Alfredo Molero Bellavía. The radar system "Vila" was tested to optimize its use in 24/7 coastline surveillance.

In May this year, cadets of the military academies went to El Pao, state of Cojedes, for training. In an area of about 40.000 hectares they participated in the simulation of a conventional war against "El País Imperialista."

The first attack was carried out by Sukhoi fighter jets Su-30MK2, bought from Russia. In the next attack, tanks were involved, protected from above by Russian-made MI-35 helicopters. In the final phase of these exercises, parachutists dropped from the sky.

Scarlette Rengijo, one of the 350 female cadets studying at the Bolivarian Military University, stressed the importance of cadets accomplishing such drills like those of El Pao.  "We are prepared for reality. We are military defending the sovereignty of our homeland," she said.

From the 7th to 17th of May, a group of fighter aircraft carried out the Yavire 01-02 exercises at the air base "Capitán Manuel Ríos" in the state of Guárico.  Sixty-one professional fighter pilots with 7 Russian Sukhoi Su-30MK2 fighter jets went on training missions to improve their operative readiness and combat capacity.

From the 17th to 19th of May, Venezuelan militias and cadets engaged in simulated phases of a "prolonged war."  The drills took place in Higuerote-Mamporal, state of Miranda, and consisted of several tasks, such as defending more than 100 kilometers of coastline in case of a hostile invasion. They also received instructions on how to use and operate explosives.

In the last week of May, the military airfield of Santa Elena de Uairen, state of Bolívar, saw the joint exercises VENBRA VI of the Venezuelan and Brasilian Air Forces. The drills included reconnaissance flights over the Amazonian jungle on both sides of the borderline, with combined training of communications and control. These maneuvers also proved to be helpful for the pilots in exchanging their experiences with surveillance logistics.

The Venezuelan-Colombian border is another sensitive area, where the FANB dispatched about 3.500 men for surveillance. Air Force brigades, tanks and logistics units are operating along the border in cooperation with their Colombian counterparts.

Operación Centinela II 2012 is aimed against narcotrafficking and contraband, according to General Henry Rangel Silva, the Venezuelan Minister of Defense.  "This is an offensive to fight anarchist groups, criminals without nationality, who are trying to incrust themselves along our border on a permanent basis," the general explained.

Operación Centinela I had already been successfully accomplished in March 2011, with 15.000 military personnel along the Venezuelan borders to Brasil, Guayana and Colombia.

During the past decade, Venezuela bought various military equipment from China, with more to come soon. In July 2012, a contract was signed to acquire Chinese amphibious tanks, communications and logistics systems for the Venezuelan Marine Infantry. The Government approved 500 million USD so that, "Venezuela will possess Armed Forces which are more powerful day by day," according to Hugo Chávez.

In August this year, Admiral Diego Molero Bellavía announced the purchase of eight Chinese anti-submarine helicopters. They will be used with the Venezuelan patrol ships, type Avante 1.400 and Avante 2.400. The Chinese helicopters, type Harbin Z9C, are manufactured by the Harbin Aircraft Corporation.

In 2011, Venezuela bought eight Chinese Y-8 planes. The Y-8 has four engines, a transport capacity of 88 passengers and 20 tonnes of cargo, non-stop flight time is 7.5 hours.

This summer, the Venezuelan Navy refurbished its Lupo frigates, Mariscal Sucre class, with Chinese help, according to the Navy Commander, Admiral Diego Alfredo Molero Bellavía. In a press note, the admiral confirmed that maintenance and modernization works were to be completed on the frigates in Puerto Cabello.

Russia is the other country selling military equipment to Venezuela. Two new battalions of T72 tanks are expected to be delivered by the end of 2012.

In July this year, a conference took place with the Commander of the Venezuelan Air Force, Major General José Gregorio Pérez Escalona, and a Russian delegation of 19 experts. The objective was to discuss the maintenance of Russian SU-30MK2 Sukhoi fighter jets and Russian helicopters, types MI-17, MI-26 and MI-35, in Venezuela. The Russian delegation went on an inspection tour, giving technical advice.

As every year, in 2012 Chinese and Russian military equipment was displayed during the military parade on Venezuela's Day of Independence, the 5th of July.

Parading along Paseo los Próceres in Caracas, 1.800 soldiers, cadets and militias celebrated the 201st anniversary of the Venezuelan Declaration of Independence. The 5th of July has also been declared as Day of the Bolivarian National Armed Forces.

It is always an exciting spectacle for young and old to see the colorful costumes and fancy outfits, for example the Presidential Honor Guard in their Husar uniforms from the times of Simón Bolívar during Venezuela's War of Independence against the Spanish crown.

The 311th Infantry Battalion "Simón Bolívar" carried Russian AKA 103 Kalashnikov assault rifles. The peasant and women militias trotted along the presidential stand with brisk steps, singing, "We will win, Comandante! We pass in front! We are here!" The special forces of the FANB came with their heads covered in black, presenting Russian Dragunov sniper rifles.

"We want to give stability to Venezuela: political, social, economic and institutional stability," President Chávez said during his welcome speech.  "Among our most important institutions, we are proud to present the FANB.  The Venezuelan National Armed Forces are here to defend our nation and to neutralize all destabilizing attempts," Hugo Chávez concluded.

Today, the FANB is better equipped, trained and ready for combat than ever before, thanks to President Chávez and the Bolivarian Government of Venezuela.

Prepared for publication by: